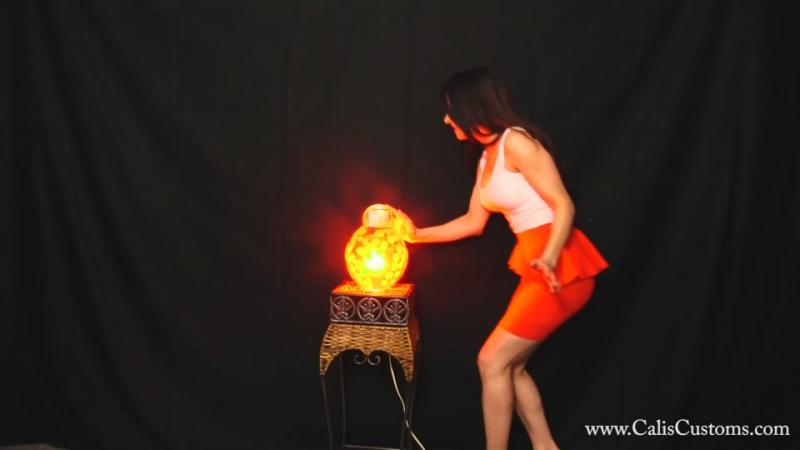 The Evil Dr. Cassandra has finally found the ancient orb of her namesake tucked safely away in the Hermopolis Museum. With this mysterious piece of history, she will be able to see into the past, present and future and gain a powerful gift of mind control. When she sneaks in to steal it, she triggers a silent alarm that alerts the local superheroines of the security breech.

Electra Woman is the first to find Cassandra and attempts to stop her thievery. Cassandra quickly enters her mind and begins to shut down her central nervous system. EW is becoming a prisoner of her own body. Just in the nick of time, Dyna Girl bursts in and uses her Electron Blocking Device to combat Cassandra's mind waves and free her friend. Then she backs Electra Woman up as they shoot a strong magnetic orb from their power belts around Cassandra. She is trapped by an invisible force field and the superheroines take her off to jail.

A year later, Cali receives a phone call from the police commissioner that the Cassandra has escaped from prison. Quickly she suits up into her Heroine alter-ego and calls Niki to let her know they have a job to do.

Once again, Electra Woman and Dyna Girl follow the tracks of Dr. Cassandra straight to the museum. The heriones are confident and shoot electromagnetic rays from their power belts. Cassandra came prepared this time though and uses her own powers to catch and turn the girls' powers against them. They feel shooting pain in their hearts and fall to their knees under Cassandra's control.

Cassandra then places her hands on their head and begins to drain their minds of consciousness.

When Dyna Girl and Electra Woman wake up, they are tied with their arms over head and feel tiny drips of cold water dropping on their foreheads. Its Chinese water torture! They struggle and try to avoid the constant dripping. After a long fight, Dyna Girl begins to lose her mind, staring blankly off into space. Electra Woman eventually follows suit as well.

Cassandra finds herself victorious with the orb and two mindless heroines willing to follow her every command at her side. A hard fought win for evil!