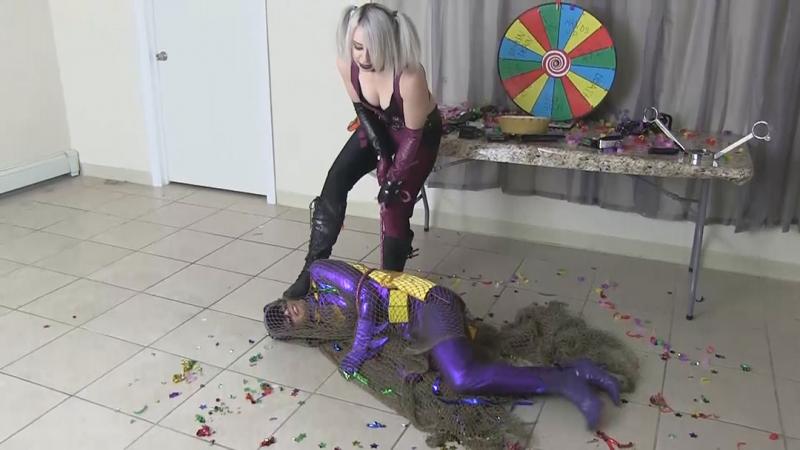 Batgirl enters the room in search of Harley Quinn and the joker. The lights are low and she demands that they come out so she can take them to jail. These two have other plans of course. Out of no where, the lights come on and Batgirl is covered in confetti.

When Harley arrives on the scene, she is all smiles and slaps a switch on the wall which sends Batgirl hurling back. She continues to explain that the confetti was magnatizing metal and the walls are equipped with a magnitizing force field. Batgirl helplessly is STUCK.

Harley continues to explain a fun game she has in store for Batgirl. The Wheel of Misfortune! Some of the winning spins include Brain Drain, Baseball BAT Girl, Nose No's and Hands Up. Interesting choices that land Batgirl in some unbecoming predicaments.

The Superherione does her best to fight back, but the hits just keep coming! She is bound in a metal neck and arm cuff device. Her face is forced into a special pie made by the Joker himself. While weak and abused, Harley has her stand in front of the wheel, which of course has mesmerizing powers allowing Ms. Quinn to remove Batgirl's uniform and apply more bondage devices, including nipple clapms. After a spray in the face with a seltzer bottle, Batgirl begins to break the spell and uses what is left of her strength to charge Harley.

But alas, Harley has more tricks up her sleeve...

Harley Quinn has more fun with her victim Batgirl. After breaking her will and controlling her mind, she starts the transformation from Superheroine to marionette! Harley uses some more pies and electro-therapy to further tame the stubborn Bat.

Finally, Batgirl is ready for the big show! You get to watch as she mindlessly dances and follows all of the orders HQ gives. This is one episode you dont want to miss!