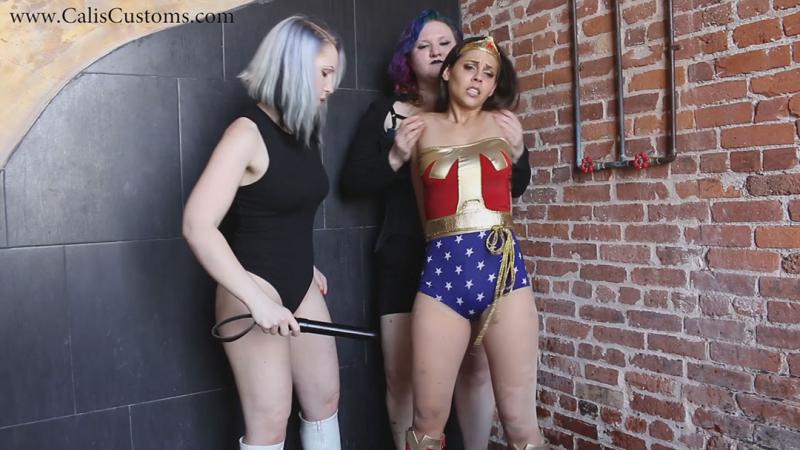 Mentalist Vonka Romanov is seen running through an abandoned building. Not far behind, Wonder Cali chases her into an open space where she seems to have disappeared. Wonder Cali calls for Vonka to show her self.  With a look of pure evil, she slowly pokes out from behind one of the posts and points straight at Wonder Cali shooting several times. The superheroine uses her cuffs to deflect the bullets. "Nice try...now it's time for me to take you to jail!" proclaims Wonder Cali.

Again Vonka runs off only need to be caught once more. The two tangle up in a fistfight. Vonka is no match against Wonder Cali and is easily defeated, handcuffed and put into a holding cell for safe keeping. Vonka struggles for a bit before realizing she's just not strong up to break chains and metal bars. She uses telepathy to call for her sidekick Gedri. When The 6 foot tall amazon arrives, she busts the gate open and breaks Vonka's handcuffs with ease. It's time to go find a superheroine!

Before Wonder Cali is able to bring Vonka to justice, she hears the cries of a lonely kitten. She follows the meows into an elevator where the door slams shut behind her. As she searches for a way out the room begins to feel with sleepy gas. It was all just a trap!

The blacked out Wonder Cali is blacked out in a strange room. Gedri throws a bucket of cold water on her face to wake her up and Vonka enters the room. The two deliver a brutal beat down to the weakened superheroine. Wonder Cali is resilient and declares that they will never break her ...but of course they have more than one trick up their sleeves. Gedri fills up a bucket  and they her repeatedly until she is ready to submit.