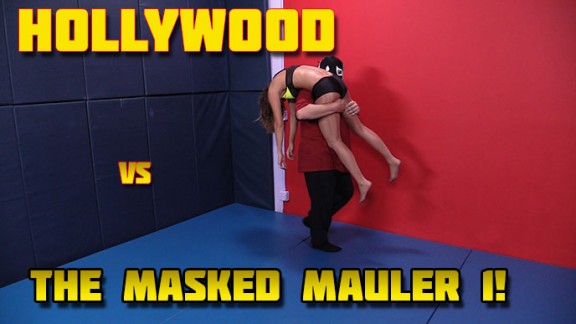 She takes the big guy out twice, but after she wakes him up the second time, the Mauler stuns her with a brutal belly punch that sends her sprawling to the floor! Now the Mauler has Hollywood right where he wants her and soon she is drifting off compliments of a big sleeper from the Mauler. He happily displays her stockinged covered feet and poses her a bit, before she starts to wake up. But the Mauler isn't done yet.

Hollywood wakes up and doesn't seem to notice what the Mauler was doing while she was out. She attempts to wrestle him again and is able to beat up on the Mauler a bit before he tangles her up and gets her in another sleeper hold. Lights out!

Once Hollywood has recovred from her sleeper attack, the Masked Mauler delivers another stomp to her midsection, lifts her up by her hair and immediately puts her in a bearhug! He proceeds to ragdoll her a bit, before she eventually runs out of air and in his arms!

At this point, Hollywood is barely holding on, so the Mauler decides to end this one with yet one more bearhug, this time a reverse! Say good night!