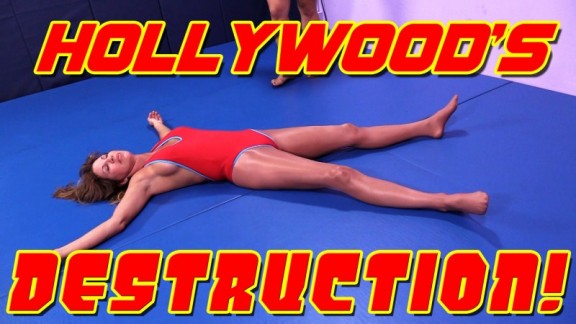 The GLOW legend is BACK at Heroine Wrestling!

THey say in sports when 2 foes meet for the first time it's hard to know what to expect or what the outcome will be. Hollywood has been a dominant force in wrestling for many years so natually she has all the confidence in the world that she can take on and beat newcoming Amazon Annie. The bigger they are, the harder they fall, right? Well, in theory, yes.

Hollywood starts out strong and delivers some tough moves to Annie as well as a low blow knee to the crotch that angers the amazon but keeps her off balance. Annie tries to counter but it's too late. Hollywood uses her skill and her experience to capitalize on her advantage and applies a sleeper to Annie, taking her down!

When Annie awakes however, she begins a thorough assault on Hollywood, one that she won't recover from for the rest of the match!

Hollywood is no match for the amazon's strong thighs and every time she finds her head squeezed between them, it's a quick trip to dreamland! Annie is also quite adept at applying sleepers and using her strength to spin and throw Hollywood around the mats.

Annie decided to play with her opponent while she is out and puts her in various poses until she starts to come to. But Hollywood's strength is sapped and she can't break free from the Amazon's clutches! She is helpless to defend herself! After Annie puts Hollywood to sleep with various sleepers and scissors, a punishing bearhug takes our daring heroine out for good and the lights go down on Hollywood.

Hollywood swears revenge on Annie and we can't wait to see the result!