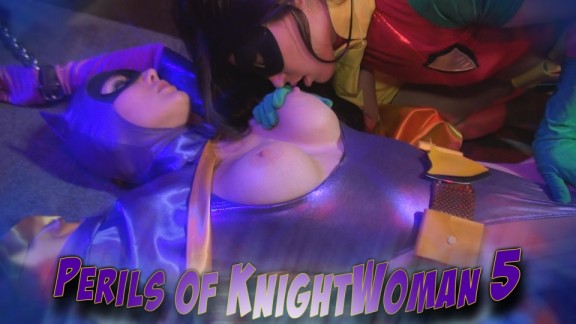 this time with the incredibly sexy Penthouse Pet Veronica Ricci underneath the Knight Cowl. She's out to save her perky sidekick Robyn, played by the ever exotic Jade Indica.

It appears Robyn has been captured by the evil villainess Mysteria, as we find her bound with her legs spread wide in the air on Mysteria's bondage table. But...appearances can be deceiving. KnightWoman arrives to find the Girl Wonder struggling in her binds and immediately gets down to freeing her precious partner.

Robyn explains how Mysteria captured her and tied her up, only to get called away by a pressing crime syndicate meeting across town. It would appear KnightWoman has arrived just in the nick of time. But...appearances can be deceiving....

As KnightWoman finishes freeing her friend...The Dark Knight tells Robyn they must track Mysteria down and she starts out of the dungeon...but Robyn is ready for a sneak attack with her special cloth and subdues KnightWoman from behind. The Arkham Avenger is caught completely off guard... ambushed by her own trusted sidekick. She slowly, and gently collapses into Robyn's waiting arms and is laid out softly onto the bondage table.

Robyn, obviously under the powerful spell of Mysteria, is excited by her catch...which she knows will greatly please her new mistress. Her mind not her own...Robyn is compelled to follow Mysteria's commands by tying up KnightWoman for safe keeping. She chains the Caped Crusader's arms above her head to the table...and de-boots her...as instructed. Robyn is overcome by her partner's pretty pantyhose encased peds...and stops to lavish her wet tongue and lips on the helpless heroines feet. She worships KnightWoman's toes and soles with abandon... then moves up her body and exposes her mentor's perfect breasts and cannot resist licking and kissing her perky pink nipples. But soon, Robyn remembers her mistress's commands... she gives the slumbering superheroine a soft kiss on the cheek... then attaches the elevated spreader bar to KnightWoman's ankles...leaving her in a most vulnerable position.

Robyn, incredibly turned on by her partner's new position, cannot resist the temptation to explore her fallen friend's body even more. She starts at her dangling feet,... and slowly makes her way to her inviting crotch, which, with the Knight Leotard pulled tightly against her, has formed quite a delicious looking camel toe. She sneaks a finger underneath the sheer leotard, and begins rubbing KnightWoman's sweet spot.

The Dark Knight awakens to find her trusted friend having her way with her (embarrassingly) moist slit while groping her exposed tits. "What...what's going on? What are you doing, Robyn?" she protests... "Snap out of it"! But Robyn is only taking orders from Mysteria now...and remembers the device her mistress gave her...in case the "KnightSlut" gave her any trouble.

Robyn quickly unties KnightWoman, and takes her place on the table. The Arkham Avenger removes her Knight Cape for Robyn to lie down on and immediately starts to work on her sidekick's sexy soles. She removes her green booties and slowly licks, sucks and kisses Robyn's nylon clad arches and toes... sending waves of pleasure rushing through the Girl Wonder's body. KnightWoman nibbles and licks her clit through her shiny red leotard and runs her tongue across the partner's breasts. They kiss and KnightWoman soon holds the powerful vibra wand in her hand. She applies it to Robyn's drenched pussy as she moans with delight.

She lies there...spent, gasping and completely unaware she has fallen into Knightwoman's trap. As Robyn tries to recover from her post-climactic haze...KnightWoman has gotten her hands on the special cloth and clasps it over the unwitting Robyn's nose and mouth.

"I'm sorry, Robyn...but we've got to get you back to the Knightcave...and break this spell Mysteria has over you", The Caped Crusader says as Robyn slowly succumbs to the fumes....and drifts off to dreamland. KnightWoman admires her partner lying there...and vows to restore her to her crime-fighting ways. She lifts her sleepy friend from the table...and makes a hasty retreat to the Knightmobile.