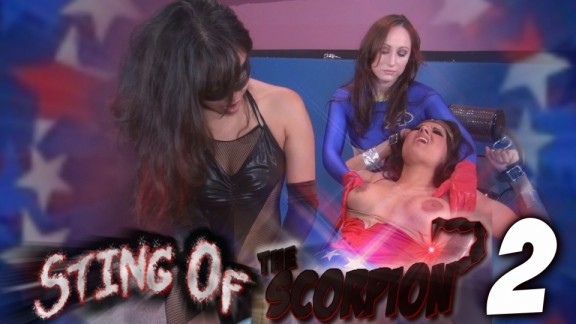 Wonder Star has tracked down the seductive Scorpion in her lair and confronts the villainess after calling in for back up. Confident she has Scorpion cornered without her stinger, Wonder Star attempts to take her into custody. But... The Scorpion never goes down without a fight!

Scorpion throws her best punches...but soon realizes the Arkham Amazon isn't even phased by her round house blows. Then she gets Wonder Star in a close clutch and stealthily removes the heroine's Power Belt! Now on an even playing field, the vile vixen catches Wonder Star off guard and doubles her over with several low blows! With Wonder Star on the ropes, Scorpion sends her off to dreamland with a special spray.

Wonder Star awakes bound to a chair by her wrists. The Scorpion has retrieved her stinger weapon and proceeds to taunt the helpless heroine...by removing her shiny red boots and worshiping her sexy feet...and running her hands all over Wonder Star's legs and tits.

Wonder Star is bound but still fiesty...and kicks Scorpion hard in the face. Scorpion soon remedies that problem with a paralyzing sting that renders Wonder Star harmless. She continues to worship her body as Wonder Star can only watch helplessly...as The Scorpion crawls on top of her and straddles her captured prey!

In the nick of time, Wonder Star's back up arrives....in the form of Rookie Blue Angel Lucky! Lucky grabs Scorpion and tosses her to the floor with ease...but makes a rookie mistake while charging towards the sneaky villainess. Scorpion trips up the Blue Angel and sends her flying into a nearby wall...smacking her head right into it. Dazed and wobbly...Scorpion wastes no time putting Lucky down for the count.

Scorpion goes straight for her new pet's feet...de-booting the Angel and enjoying a long foot worship session...licking and kissing her nylon-clad feet with abandon. She then uses her stinger to cast an entrancement spell on Blue Angel Lucky, transforming her into her new slave and minion.

She orders Lucky to take out Wonder Star's perfect breasts and worship them... which she obediently does, much to the amazon's protests! Wonder Star can only squirm to get away as The Scorpion begins using her trusty vibra-wand on her vulnerable crotch. The blue Angel continues to grope her former partner's tits as The Scorpion brings Wonder Star to a body convulsing orgasm.

Finally satisfied, Scorpion sends both of the fallen heroines to dreamland... as Arkham Heights is now defenseless to her criminal mischief... and The Scorpion slinks off into the night!