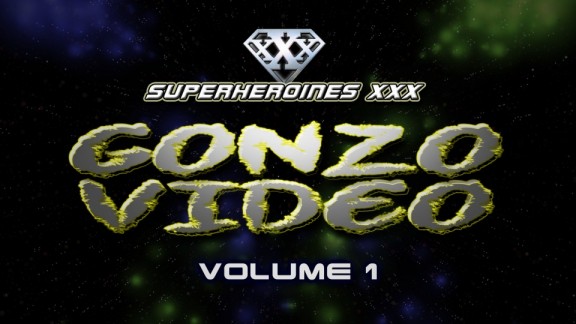 Part I - WONDER WOMYN vs THE LEOPARD

Wonder Womyn (Jessica Jaymes) catches The Leopard (Melissa Jacobs) red handed trying to steal secret documents...but the tables are turned on the Arkham Amazon...and she soon finds herself at the mercy of the felonious feline. When Wonder Womyn awakes in The Leopard's lair, she finds herself bound spread eagle with her arms cinched tightly behind her head. The cat toys with her bound and helpless prey before producing a vibra wand and applying it to Wonder Womyn's vulnerable spandex covered mound, Wonder Womyn fights to remain stoic and keep her composure, but The Leopard's persistence is unrelenting...and soon the heroine succumbs to the buzzing on her clit and has 3 mind numbing orgasms. "What have you done to me?" Wonder Womyn asks in a post orgasmic haze..."No one's ever made me feel this way before". The Leopard assures the Princess of Power that this was only the first step in her journey to the dark side...as she licks and paws at her bound slaves erect nipples. The Leopard unties her new pet and leads her off into the next chapter of her transformation to evil.

Part II - THE STING OF THE SCORPION

Argon Girl (Brett Rossi) has had enough of her evil cousin from her home planet (Emily Addison) always trying to take over earth, and decides to have it out with her. The two have scheduled a meeting to discuss their differences, but...the meeting turns into a battle of superiority when Darkseid Argon Girl brings a chunk of their destroyed home planet to the party. She pulls out the meteor rock...and holds it before her arch nemesis. "No!...That's Argonite!" Brett exclaims backing away. Darkseid Argon Girl laughs, as the glowing green rock has no effect on her...but is steadily weakening her goody two shoes cousin. "Yes...I can see it's draining your powers!" she says with a gleam in her eye. Soon, Argon Girl is defenseless and at the mercy of her evil relative, who is bent on turning Argon Girl to the dark side so that they may rule the planet together as one. Darkseid begins her spell of seduction, and produces a vibra wand and places it upon her shiny pantyhose clad pussy..to which Argon Girl begins to stir. The steady buzzing on her clit clouds her resilience...and soon Argon Girl is forced to endure multiple orgasms, as Darkseid relishes in her surrender. She deboots her slave and exposes her cousin's breasts...licking and sucking them as Argon Girl is lost in her post climactic euphoria. Darkseid cranks up the wand again for round two on Argon's wet slit, and this time refuses to stop making her cum until she is fully under her spell.

Argon Girl's will completely shattered, she is now Darkseid's willing sex slave. Darkseid Argon Girl commands her pet to return the favor, and Argon willingly applies the vibe to her cousin's super snatch. Darkseid has been so turned on by her successful seduction, it doesn't take her long to succumb to the vibrator's demands. Argon then licks and sucks on her new mistresses' tits...as Darkseid is mesmerized at her cousin's eagerness to please. Soon the Earth's most powerful superheroines each take a wand in hand and have multiple dueling orgasms together until their silky hose are soaked through. The two superheroines are floating on a sea of sensual bliss, as the kissing cousins share one final embrace.