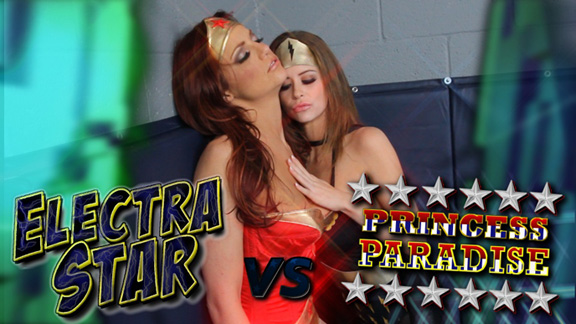 Electra Star is plotting her next crime spree in her downtown hideout... but first she has to get that pesky Princess Paradise out of her hair once and for all. Lucky for the high voltage villainess, the Amazon Avenger enters her lair prepared to take Electra Star straight to the Arkham Heights Penitentiary. Before Paradise can get the drop on her, Electra blasts the superheroine with her powerful electro-rays and zaps the mighty warrior against the wall, paralyzing the defenseless princess. Weakened from her jolt, Paradise is now at the mercy of Electra Star and her evil plans.

Electra Star asks her again, "Will you be my sex slave?"...but beaten, not broken... Princess Paradise summons all her superheroine strength and vows to get her revenge on her nemesis. That only serves as a challenge to the amused villainess... and Electra goes right back to work with the vibra-wand. She forces yet another forced orgasm from the now fully defeated heroine who lapses into a dreamworld of ecstasy afterwards.

Electra Star is confident she'll not have Princess Paradise to worry about as she sets off into the night to complete her latest crime spree... vowing the next encounter they share, will be much more intense!