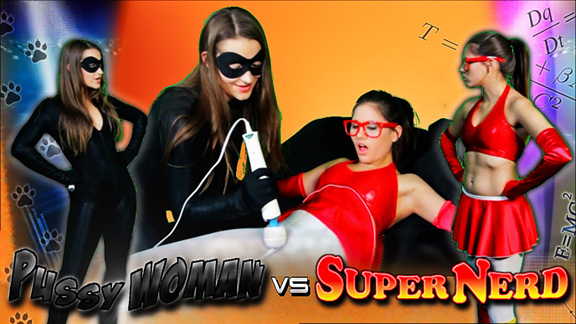 Pussywoman is in her lair when she is confronted by SuperNerd. SuperNerd is easily tricked into picking up a handkerchief dropped by PussyWoman but something isn't right. Soon, she wakes up in cuffs and finds that PussyWoman is trying to bring her under her spell. But SuperNerd has a defense that makes her immune to PussyWoman's magic.

PussyWoman does what she does best and uses the power of the orgasm to break SuperNerd's will!
SuperNerd reveals the source of her defense and powers and is soon taken under PussyWoman's control.

PussyWoman then seduces SuperNerd and instucts her to recruit more heroines to join her evil cast!