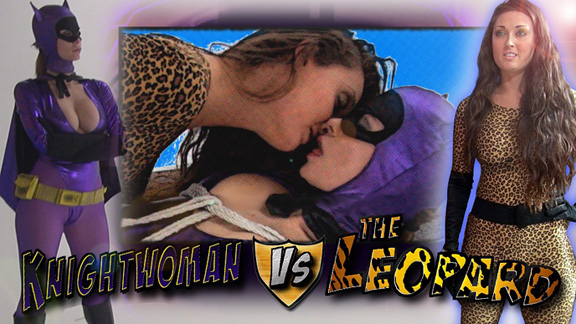 Knightwoman has been summoned by the Mayor of Arkham Heights. His precious daughters have been reported missing from Arkham U and all signs point to the felonious feline...THE LEOPARD being the villainess behind the hostage demands.

Knightwoman traces an anonymous call back to the Leopard's Lair only to find one of the Mayor's daughter's bound & gagged inside and quickly begins untying the helpless coed! While Knightwoman is focused on untying the complex knots around her ankles, the coed begins disrobing...slowly revealing herself to be...The Leopard in disguise! Before Knightwoman can detect the trap, The Leopard pounces and soon has The Dark Knight subdued with the help of her trusty sleepy cloth!

Once incapacitated, The Leopard has some fun exploring Knightwoman's curvaceous body... Revealing and then groping her perfect tits from underneath her shiny leotard. Leopard is helpless to keep her paws off of the defenseless superheroine. Knightwoman begins to stir and is shocked to find her breasts exposed...but The Leopard is not quite finished exploring and send the crimefighter back off to dreamland.

Leopard relishes in her good fortune and begins licking and sucking on Knightwoman's tits and rubbing her spandex covered sweet spot. She decides to use the ropes she used on herself to tie up the sleeping heroine. Knightwoman wakes to find herself bound and is soon gagged for protesting as the feline assault continues, Leopard taunts and teases Knightwoman with her paws like she's her own personal cat toy. She catches the caped crusader trying to untie herself and is treated to another dose of the cloth as The Leopard excuses herself to go check on the REAL Mayor's daughters she's holding hostage.

Knightwoman awakens again...only to find herself in an even stricter tie. Now unsupervised, the Dark Knight has a few tricks up her sleeve to free herself of the tight bondage. After struggling a bit to loosen the knots, she uses the razor sharp heel of her Knight boots to cut through the ropes and soon has herself free.

She quickly redresses and prepares herself to find The Leopard, when she hears the villainess returning. Knightwoman hides hoping to ambush her. Leopard enters and is shocked to find the caped crusader is missing. Knightwoman steps out and tells the Leopard she is done playing around and its time for justice...But The Leopard has other ideas.

She points her power bracelet at Knightwoman and tells her to 'get ready to stick around' as she fires a paralyzing ray at the crimefighter which slowly freezes her in place where she stands. Leopard releases the beam and steps closer to taunt the frozen heroine. She gropes and fondles her new motionless living mannequin...exposing her breasts again and rubbing her vulnerable crotch. Knightwoman can only internalize her humiliation as she has been tricked once again. Leopard excuses herself again to go collect the ransom money from the desperate Mayor.

After a while...the effects of the freeze ray begin to wear off and Knightwoman is able to move everything but her feet. She uses her Knight Scope to place a tracker on Leopard's whereabouts and then uses it to unstick her frozen feet from the floor...and starts after The Leopard.

Leopard is waiting for her in her dungeon...and Knightwoman arrives right on cue. Leopard blasts her again with her power bracelet, this time using it as a tractor beam that pulls Knightwoman towards her bondage table. She uses the ray to flip the caped crusader over and then sends her back off to dreamland again with her special rag.

Knightwoman awakes to find Leopard on top of her on the table. She is bound tightly to the table. Leopard removes her boots and any chance for escape. Leopard licks and kisses her pantyhose clad toes & soles...and soon turns her attention to breaking Knightwoman's resolve for good. She produces a vibrawand and prepares to make the Dark Knight her personal sex slave. She pulls her shiny leotard to the side and presses the vibe against her pussy and Knightwoman gasps. She vows not to submit...but the buzzing on her spandex mound is too much and she is soon succumbing to multiple intense orgasms.

Satisfied Knightwoman is now completely under her control, Leopard unties her new superheroine sexual playtoy and the two vixens enjoy a nice long make out session. Will anyone step forward and break The Leopard's twisted spell over Knightwoman and bring her back from the dark side? Tune in next time...Same Knight Time...Same Knight Channel!!

Special thanks to RenoBinder for his awesome rope work in this feature!