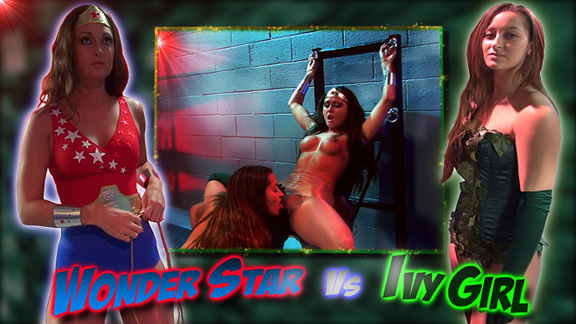 Wonder Star is out on patrol without her sister Princess Paradise and stumbles upon the lair of Ivy Girl! Ivy enters, surprising the junior crimefighter by blasting lasers at her from her stun stick. Wonder Star is able to deflect the rays with her power bracelets and then lassos the villainess.

Using her Golden Lasso of Truth, Wonder Star questions Ivy Girl about her next sinister plan. While the lasso compels Ivy to tell the truth, it doesn't prevent her from casting an entrancement spell upon the rookie superheroine. Ivy commands Wonder Star to release her from the lasso and soon has Wonder Star in the palm of her hand!

Ivy Girl kisses her new slave and blows a seduction breath into her face. She then handcuffs the heroine to the wall and begins to have her way with Wonder Star. Ivy exposes Star's wonderful tits as she licks and sucks on them. Ivy then wields the vibra wand on Wonder Star's vulnerable pussy and the defenseless heroine soon has an earth shattering orgasm! The two vixens make out and Ivy puts Wonder Star to sleep with another seductive breath,

We next find Ivy leading her new sex slave to a bondage chair where Ivy commands her minion to worship her feet. Wonder Star happily complies as she removes Ivy's boots and lavishes her tongue and lips on Ivy's nylon clad toes and legs. Wonder Star then removes the villainess's ivy adorned corset and worships her perfect breasts. Ivy decides it's time for her orgasm and positions Wonder Star between her long, spread legs. Wonder Star rips open the crotch of Ivy's shiny tights and uses her talented tongue to bring Ivy to climax.

Ivy & Star make out afterwards and the vixen orders her sexy slave to strip for her. Wonder Star removes her star spangled leotard and Ivy uses her feet on her perky tits and ass. Turned on by what she sees, Ivy decides to reward Wonder Star with another orgasm of her own.

Ivy rips open the crotch of her hose and begins lapping away at Star's wet pussy. With her mistress's tongue swirling on her clit, Wonder Star is helpless but to surrender to an intense climax that leaves her weakened and completely spent. Ivy kisses her captive and then blows one last sleepy breath, sending Wonder Star off to dreamland.

Will Princess Paradise be able to save her hopelessly entranced sister and put Ivy Girl behind bars? Stay Tuned!