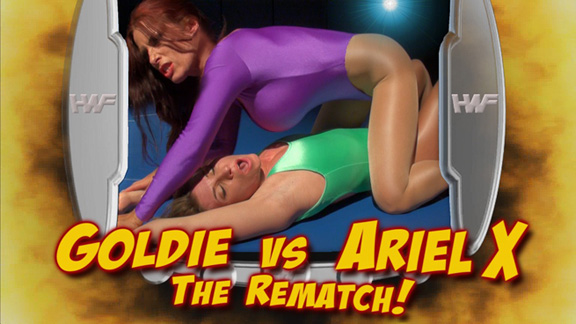 Heroine Wrestling is proud to present a rematch to one of our top selling bouts! Goldie returns with a vengence to settle the score with her arch rival Ariel X! The two bombshells return wearing sexy thong spandex leotards and shiny Wolford pantyhose and this turns out to be an all out grudge match!

Round One sets the tone early as Goldie immediately begins with a wicked titty claw on Ariel's giant boobs. Ariel retaliates with her own titty twisters, pinching Goldie's nipples til she screams in agony. Clearly the rule book is out the window as the girls brutalize each other with crotch kicks, belly punches, pussy claws, titty & ass smothering and multiple thong wedgies! Both girls are forced to submit once to each other, but it's Ariel who takes the round with a rear naked choke that sends Goldie off to dreamland.

It seems Goldie is destined to lose again to the powerful Ariel...but Round Two begins with Goldie surprising Ariel X with a brutal beat down! She unleashes a severe barrage of kicks and punches followed by fierce arm & leg spreaders, camel clutches and choke holds. Ariel X is on the ropes but weakens Goldie with a cheap crotch kick that allows her to regain some ground. She kicks and tosses the helpless Goldie around the mat and even uses Goldie's thong to walk her around the ring like a bitch. The humiliation is too much to take and Goldie summons all her strength to take down Ariel X once and for all!

Goldie weakens Ariel with a full press back breaker, stretching her opponents arms nearly out of their sockets and finishes her off with an impressive sleeper hold. With her foe lying vanquished at her feet, Goldie raises her arms in victory after finally redeeming herself.