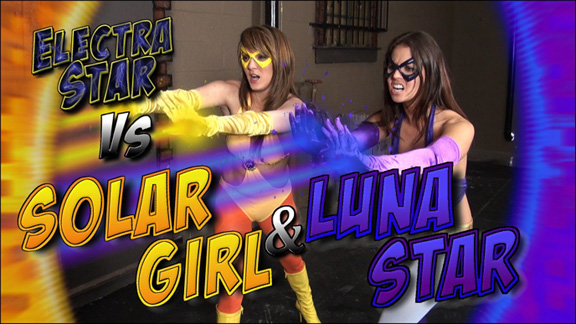 Electra Star is back on the scene terrorizing the city. Solar Girl & Luna Star use the Supercomputer at the Hall of Heroines to locate the the high voltage vixen. A chase ensues, and soon Solar & Luna have Electra Star trapped in an alley. Electra is not one to give up easily and zaps the pesky heroines with a jolt of electricity shooting out of her palms. The celestial superheroines fight back with their own powerful rays with a tag team zap of their own. Electra Star is blasted backwards, but not impressed. She sends another shocking blast their way, but the super girls retaliate with a volley of their own and the two energy forces merge in a powerful standoff. Electra can hold her ground no longer and summons all of her power to send one final electro-blast at Solar & Luna, causing a massive explosion and shockwave that knocks the heroines off balance. Electra escapes in the confusion.

Solar Girl & Luna Star decide to split up and continue their pursuit of Electra Star. Luna enters a strange warehouse, and soon finds herself face to face with Electra in her lair...next to an ominous looking metal cage. The two exchange punches, but Electra's energy resources have had time to recharge and she zaps the defenseless do-gooder with another strong jolt. The lightning sends Luna flying back, pinning her against the wall. Electra pauses her assault to assess the damage and approaches Luna. She grabs a hold of Luna's metallic power belt and uses it to send an enormous blast of electricity that courses through her already weakened body. Electra is done playing around and gives Luna several body blows before ripping Luna's top down and exposing her bountiful tits. She then pushes Luna inside the cage and gives her one final zap to put her to sleep.

Luna Star wakes up bound inside the cage. She fights to free herself of the ropes, but her power belt was damaged with that previous jolt, and she hasn't the energy to break out. Solar Girl enters and uses her solar rays to blast the ropes to pieces and frees her partner. The two race off to put an end to Electra Star's reign of evil.

Solar & Luna track her to her boudoir...plotting her next move and they vow to take her down. Electra surprises the duo with an offer of surrender...but soon changes her mind and shoots another shocking blast into them...knocking them back onto a couch. With the two heroines vulnerable, Electra unleashes her newest, sexy weapon...her Hypno-Hooter Ray! Electra Star unleashes her genetically altered tits and a warm, soothing ray emits from them and begins to entrance the dynamic duo. Electra commands them to gaze upon her magical breasts as the relaxing rays cloud their minds. She tells them the rays are making them hot for each other and commands them to make out, so she can make a quick get away. The girls are helpless to resist her incantation...and are slowly drawn into a passionate embrace.

Electra Star bids the helplessly entranced superheroines a fond farewell and sneaks off to finish her evil plan of domination....leaving the vanquished crime fighters making out and sucking on each other's perfect tits.