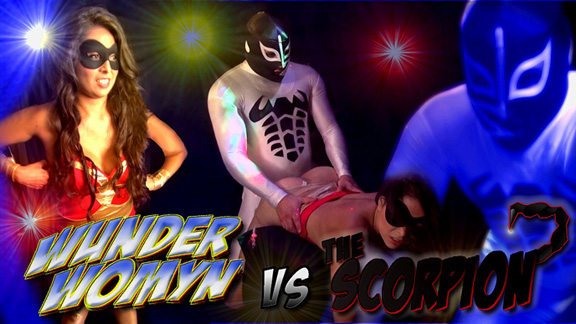 Wunder Womyn has tracked the Scorpion to his lair. Wunder Womyn easily takes Scorpion to the ground with several body blows and vows he will not get away this time. But Scorpion tells the over-confident heroine that the laser lights in his lair are weakening her powers...and he suddenly grabs her lasso of truth and wraps it around her!

Entranced by her own magic lasso, WW has no choice but to comply and answer truthfully. He asks if she tracked him down because she secretly wants to fuck him..."Yes, Master" she confesses. Scorpion is happy to oblige her...but first he wants to toy with her a bit.

He removes her star spangled briefs, rips open her pantyhose and exposes her Wunder Pussy! With a snap of his fingers he adjusts the laser lights to full strength, further weakening the Amazon's powers. He takes out his trusty vibra wand and places it on her sexy pussy. He vibrates WW to an intense climax and then sends her off to dreamland.

She awakes and Scorpion there in front of her with his cock ready to suck. She takes him into her mouth and slowly begins engulfing the shaft. WW deep throats him for several minutes and asks her new master if this is what he wants. "Not Quite" he says and moves around behind her and spreads her legs.

With his prey beaten & spent, he tells WW this is just the beginning and tosses her limp body to the floor and leaves her in her orgasmic fog and faced with the ultimate superheroine humiliation.