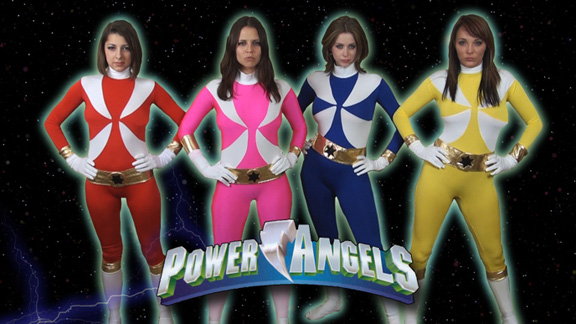 The Power Angels have tracked down Mighty Hypnotic and think they have him cornered this time! But...the clever villain has a trick up his sleeve. Before the Angels can make a move, Mighty plays a hypnotic soundtrack for the heroines which slowly begins taking over their minds and bodies.

Mighty instructs the Power Angels to let the soothing music relax them as they gently begin swaying to the sounds in the room. Comfortable they are no longer a threat, Mighty Hypnotic tells the Angels to turn around and display their sexy spandex covered asses for him. They have no choice but to comply, as the hypnotic beat of the music clouds their judgement. He then instructs the helpless heroines to dance sexily for him...and to run their hands all over each other's bodies. The girls comply as they writhe and gyrate to the music.

Mighty marvels at his slave's delight and rewards them by turning back on the hypnotic soundtrack and commanding them to make out for him with an evil laugh. The girls are more than happy to do his bidding. The heroines share long passionate kisses and caresses as the clip comes to a close.