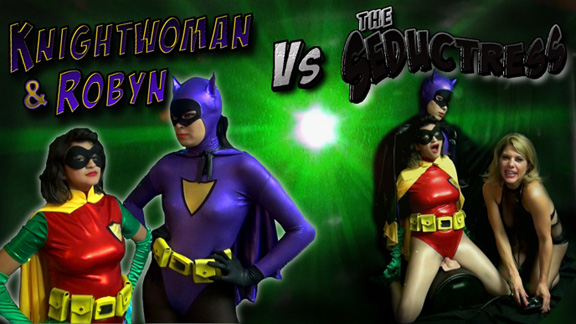 Knightwoman and her young sidekick Robyn have found Seductress's dungeon lair...but the sexy villainess is nowhere to be found. They find her Sybian on the floor, but have no idea what to make of the devious device. They decide to split up to quicken their search and the Girl Wonder leaves to investigate another chamber of the lair.

Knightwoman searches for her prey but is surprised from behind by the wily Seductress who has been waiting for the duo to arrive. Seductress lures the Dark Knight into a false sense of security and then springs her hypnotic crystal on the unsuspecting superheroine!

Seductress uses the crystal to hypno Knightwoman...telling her "Evil is power....Evil is sexy", and slowly wills the helpless, entranced heroine over to the dark side. Knightwoman has no choice but to repeat the Seductress's mantra back to her and vows to do whatever her new mistress desires!

Seductress turns the Sybian even higher and the sensation is too much for the Caped Crusader to resist. Knightwoman screams as a massive orgasm is forced from her...her body violently shakes as she succumbs to the wishes of The Seductress. Knightwoman collapses forward, panting hard as Seductress unleashes her next surprise! She clamps a sleepy rag over Knightwoman's face and the hypno'd heroine is sent off to dreamland. Her eyes roll over white as she falls off the Sybian to the floor. Seductress spanks the sleeping heroine's ass and leaves her there. The trap is set for her next victim...the pesky sidekick Robyn.

Robyn enters and finds Knightwoman still asleep on the floor. She desperately tries to wake her crimefighting mentor. As she stirs, Knightwoman kicks the controls of the Sybian and the machine begins buzzing ominously. Robyn asks "What is this contraption?"...and she is about to find out!

Seductress re-enters and Robyn snaps into a defensive stance. Seductress is not impressed...and commands Knightwoman to grab her...which she does and shoves her sidekick onto the already vibrating Sybian forcefully! Knightwoman holds Robyn in place as Seductress turns the machine up higher. Robyn begs Knightwoman to help her, but the mindless heroine's will is not her own. Robyn fights hard to resist the incessant buzzing between her legs as the Seductress rubs the helpless sidekick's tits and kisses her face. Seductress turns the machine even higher and takes great delight that she has the Dynamic Duo at her mercy!

Robyn can resist no more and has an intense forced orgasm at the hands of her captor. Her spirit weakened...Robyn is now helpless as Seductress commands Knightwoman to force the sleepy rag over her young charge's face. Robyn succumbs to the fumes, collapsing off the device into Knightwoman's arms. Seductress then commands Knightwoman to apply the cloth to her own face..."Yes, Seductress" is all the Caped Crusader can say as she presses the sleepy rag over her nose & mouth and soon joins her friend in a slumbering heap.

Seductress stands over the defeated Dynamic Duo, resting peacefully after their first ever ride on her orgasm machine! Seductress leaves the sleeping heroines and sets out into the night....looking for the next superheroine to conquer!