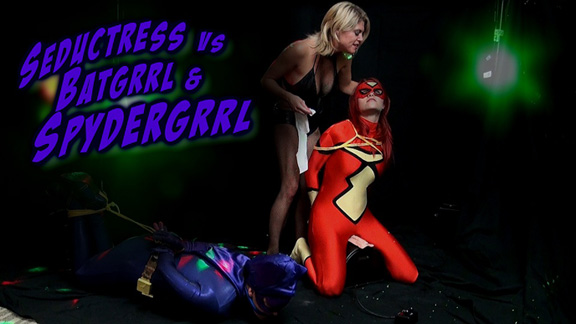 Batgrrl is helpless as she struggles in her strict bondage. She rolls around on the floor...showing off her sexy curves while wimpering as she tries to find a way out of this trap. A Sybian machine sits ominously next to her as Batgrrl wonders what her fate will be!

Later...We find Batgrrl now gagged and still struggling with her unforgiving restraints...but she's no longer alone. Spydergrrl is pastout cold, straddling the Sybian next to her. Batgrrl's cries for help awaken the Arachnid Avenger and she groggily sits up finding herself tied tightly and just as vulnerable as her superheroine friend.

Weakened by her forced orgasms, Spydergrrl is then sent off to dreamland by the Seductress with her handy chemically treated cloth...and Spyder collapses off the cum-machine like a ragdoll.

Seductress then sits herself down on Batgrrl's back and taunts the bound superheroine before applying the sleepy rag. Batgrrl's eyes open wide...and cross as the fumes do their thing...and slowly the dynamic damsel is soon sleeping peacefully. Seductress exits and leaves the two defeated heroines slumbering in her lair.