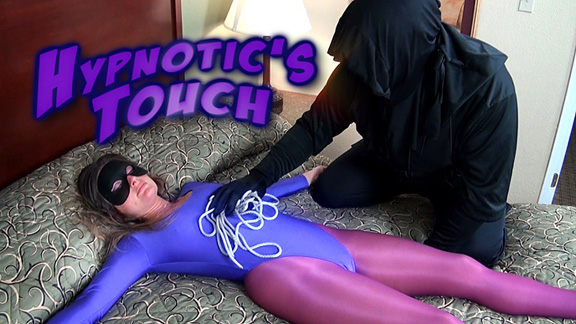 Novice Blue Angel Tina wants to make a name for herself by taking down The Mighty Hypnotic without back up in hopes to move to the top of her recruitment class.

Tina ambushes Mighty Hypnotic in his lair and the superheroine pummels the unsuspecting villain with severe body blows, kicks and punches...But her lack of training leaves her vulnerable. The Mighty Hypnotic has a surprise for the rookie Angel in the form of a sleep inducing rag. He pounces on his fiesty prey and the fumes slowly overcome Tina. Mighty throws the now sleeping ragdoll over his shoulder and carries her off to investigate the rookie further.

Mighty joins his napping intruder on the bed and begins fondling Tina...pausing to grope her spandex covered tits, ass and pussy...then turning his attention to her nylon covered feet. He basks in the glow of her tiny toes as he continues to manhandle her vulnerable body. He decides it's time to tie up Tina before the sleepy fumes wear off.

Spent and weakened by her sheer extascy...Tina is then forced back to dreamland with Mighty's special rag. Mighty unties his sleeping slave and pulls her to the edge of the bed. He lifts and carries her away to his private dungeon...where even more evil awaits. The poor rookie Angel was no match for the "Hypnotic's Touch"!