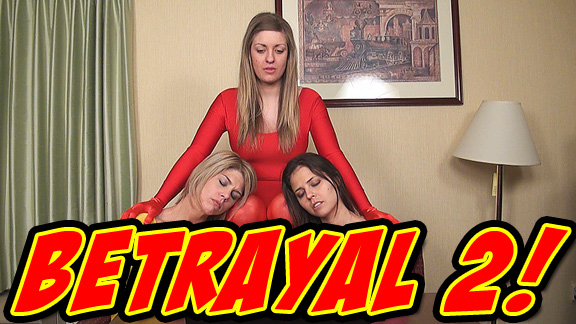 A short time later they wake up and realize this has got to stop, but here comes Red Ranger again, who knows what she has planned! The Rangers fake being out and when Red Ranger shows up with ropes, they ambush her and a fight breaks out as they try and overpower her. Yellow Ranger breaks out one of the gas canisters and manages to dose the Red Ranger, but the PInk Ranger has gotten in the way as well! With her partner out, Yellow Ranger wastes no time tying up Red Ranger. She brings Pink Ranger around and they finish tying up Red Ranger. They leave to get orders from HQ.
Soon after they leave, the Red Ranger awakens and manages to break free of her ties. She goes to her laptop and makes a connection with...THE MIGHTY HYPNOTIC!!! ... He admonishes her efforts and tells her she needs to capture the Yellow and Pink Ranger once and for all! She goes off to finish the job. She sets up a meeting with Yellow Ranger and they discuss what has been happening to Red Ranger. Yellow Ranger insists that she needs help and that they want her back on the team. Things go well until Red Ranger once again tricks the YEllow Ranger into a false sense of security and WHAM, she is out like a light once again!

THIS time, when YEllow Ranger comes to, she is in front of Red Rangers laptop and soon is being pulled under the spell of the Might Hypnotic!
He instructs the Yellow Ranger that she is to help Red Ranger capture the Pink Ranger. Yellow Ranger is mesmerized and sets off to obey her orders.

Yellow Ranger and Pink Ranger are having a discussion but all is not right with Yellow Ranger. Pink Ranger asks what's wrong and says her name and the next thing you know she is in a fight with Yellow Ranger! Yellow Ranger puts her out with a blow to the head. She ties Pink Ranger up and awaits the return of Red Ranger. While they wait, Pink Ranger attempts to snap Yellow Ranger out of her trance. She finally breaks through and Yellow Ranger helps to untie Pink Ranger. As they discuss what to do, Red Ranger shows up and they are able to overpower her! They tie her up and this time they plan to take her in. Red Ranger comes to and pleads with them to let her go, but to no avail. The girls have their minds made up! Red Ranger tries appealing to their past friendship and reminds them of all the things they did together and soon the other Rangers are softening their stance and they let her go, thinking that maybe she HAS snapped out of her mind controlled state once and for all. SUPRISE! They are greeted by 2 chops to their necks! Soon the girls wake up and they are confronted by the Mighty Hypnotic. He puts the girls under with his spiral and commands the Rangers to obey their new mistress, the Red Ranger. The Red Ranger puts the girls through their paces, making them worship different parts of her body as well as each other. But Red Ranger says the one phrase that can snap the girls out of their trance and soon they are in a 3 way fight to the finish!! Who will win and how will this all end???