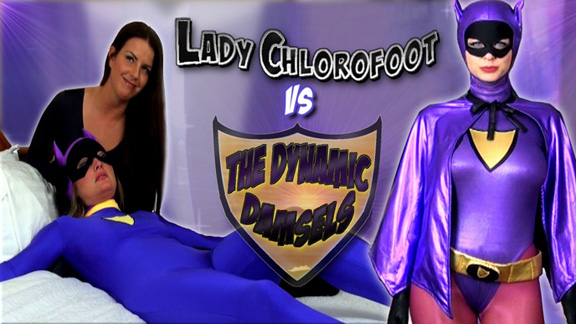 Lady Chlorofoot is back and ready to put her arch nemesis, Knight Woman & Knight Girl under her spell! The Dynamic Damsels have tracked the evil villainess's tainted footsteps back to her lair, but they make the mistake of splitting up in their search.
Knight Girl is ambushed and is first to be rendered helpless and become a play toy for Lady Chlorofoot's insatiable foot fetish lust. Knight Girl is fondled mercilessly as Chlorofoot has her way with her petite superheroine feet. After succumbing to multiple trips to dream land, our faithful sidekick is lured under Chlorofoot's spell and becomes her willing partner in crime. The trap is set for the unsuspecting Knight Woman. Knight Woman arrives and quickly dispatches Lady Chlorofoot...but is shocked to have the tables turned on her by her own partner! Knight Girl subdues her mentor and friend, giving the villain a chance to put her best foot forward! Knight Woman is helpless but to become intoxicated and weak under Lady's chemically laced foot. Knight Woman is then further humilated as Knight Girl is forced to worship her feet while she is fondled by Chlorofoot. She awakens and is horrified to endure a forced orgasm at the hands of her captors. After her toe curling climax, she is placed under Lady's spell, and commanded to give her young sidekick a forced orgasm of her own.
Knight Girl is no match for the vibrating magic wand and has a mind shattering orgasm. Chlorofoot then sends both the defeated heroines back off to dreamland...leaving them tangled together as they drift off in ecstasy. Will the Dynamic Damsels ever awake from this Knightmare?