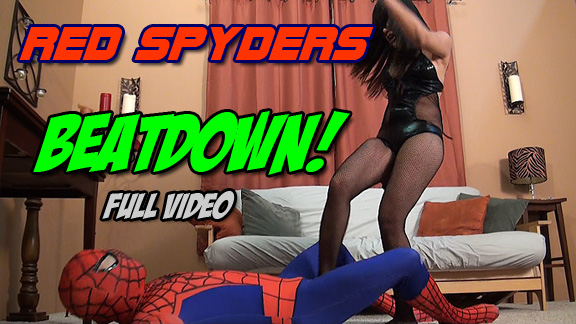 This is the full video and comprises 2 parts:
The Scorpion Attacks, which is the Femdomme section of the video and
RedSpyder Strikes Back! Which is RedSpyder getting his revenge. So if you are only interested in seeing the Femdomme part, You can order only part 1 here:

The Scorpion is out to steal top secret documents when Red Spyder tracks her down and attempts to apprehend her. While he is carrying her out the door, she injects him with a special venom that works against his body chemistry and weakens him, putting him at her mercy! The Scorpion wastes no time working over RedSpyder, repeatedly kicking him in the groin, keeping him down every time he tries to get him. She pulls out a flogger and flogs his body watching him writhe in pain with each strike! She continues her brutal punishment as he tries to escape to the couch, alternately stroking him and then bashing him. It's the ultimate pleasure and pain!
Soon she tires of his constant moaning and groaning and knocks him out for good. She injects him one more time to keep him out and continues her search for the documents. Lo and behold, he starts to awaken and now he's pissed! The serum has reacted strangely with his body chemistry and now he has turned aggressive! Scorpion is unable to stop RedSpyder and is immediately attacked and forced to take whatever he gives her! He forces himself inside her mouth over and over until he explodes all over her face, and then whisks her up and carries her away to the precinct!
An explosive and brutal performance by both!