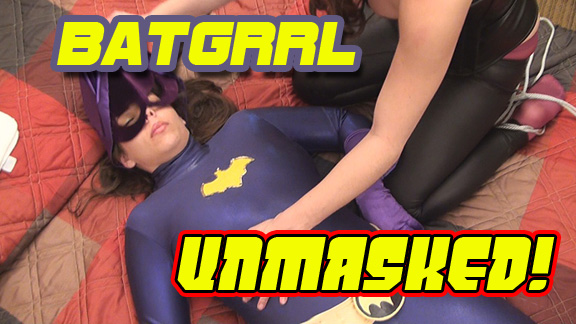 The 2nd release in our Sleepy Superheroine Series! Batgrrl is on the hunt for Krazy Kym but unfortuantely gets jumped from behind! Kym works over the caped heroine with the cloth but Batgrrl finally manages to overpower the villainess! Victory doesn't last long however and soon Kym sends the heroine back to dreamland!
She decides to end this game once and for all by unmasking the heroine and taking pictures for the local gazette! She is shocked to find out the true identity of Batgrrl!
Once Kym leaves, Batgrrl regains her senses and realizing she has been exposed, decides to mount one last attack to hopefully bring her attacker to justice and save her secret identity but Kym freezes Batgrrl with a Freeze Ray and puts her out once again! Kym carries off her prize and it doesn't look like BatGrrl will be doing much crime fighting for a while.