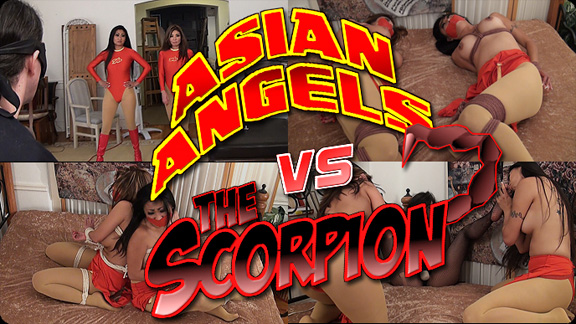 The Asian Angels are on the trail of the Scorpion who is trying to get possession of the famed "Scorpion Sting" a mystical device that can emit gas or a special stinger blast that puts the victim immediately under the power of the caster!
The heroines track Scorpion down to a warehouse but she and her henchman isn't going down without a fight! The battle ends quickly, however, as the Angels take charge, but not before the Scorpion can get hold of the stinger and puts the Angels to sleep! They are brought to a room where the Scorpion puts them under a trance while asleep and has them worship her. Once she is satiated, she puts them to sleep and ties them up.
The Angels manage to eventually escape and when the Scorpion comes back for them, they ambush her, knock her out and leave her for the authorities. But did they forget to take the stinger? Angel Akira finds out and soon she is untying the Scorpion and doing her bidding!